September 14, 2014
God erects Inukshuks for his children. The mysterious stone figures known as inuksuit can be found throughout the circumpolar world. Inukshuk, the plural of which is inuksuit, means "in the likeness of a human" in the Inuit language. They are monuments made of unworked stones that are used by the Inuit for communication and survival. The traditional meaning of the inukshuk is "you are on the right path." 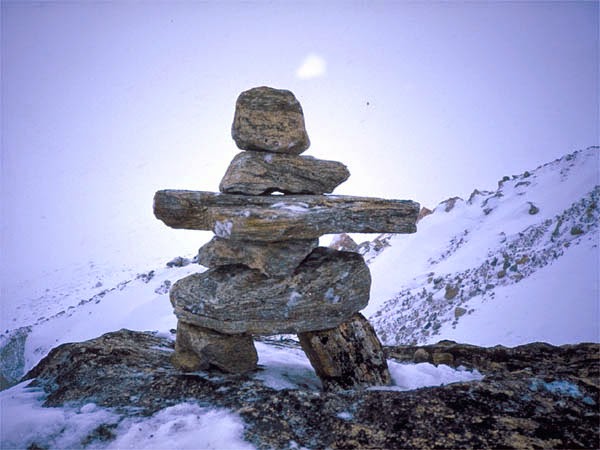 The Inuit make inuksuit in different forms for a variety of purposes: as navigation or directional aids, to mark a place of respect or memorial for a beloved person, or to indicate migration routes or places where fish can be found. Other similar stone structures were objects of veneration, signifying places of power or the abode of spirits. Although most inuksuit appear singly, sometimes they are arranged in sequences spanning great distances or are grouped to mark a specific place.

These sculptural forms are among the oldest and most important objects placed by humans upon the vast Arctic landscape and have become a familiar symbol of the Inuit and of their homeland. Inuit tradition forbids the destruction of inuksuit. An inukshuk is often venerated as symbolizing an ancestor who knew how to survive on the land in the traditional way. A familiar inukshuk is a welcome sight to a traveler on a featureless and forbidding landscape.

An inukshuk can be small or large, a single rock, several rocks balanced on each other, round boulders or flat. Built from whatever stones are at hand, each one is unique. The arrangement of stones indicates the purpose of the marker. The directions of arms or legs could indicate the direction of an open channel for navigation, or a valley for passage through the mountains. An inukshuk without arms, or with antlers affixed to it, would act as a marker for a cache of food.