Useless idiots and the gospel message. 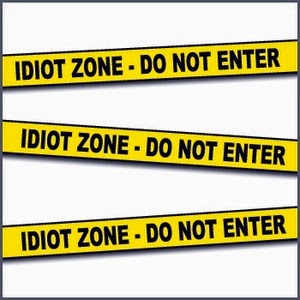 A drill sergeant barked out an order to a bunch of recruits: "All you useless idiots, get moving!" All but one obeyed. Angered by his seeming defiance, the sergeant marched up to him and growled, "Well?" The young recruit replied, "There certainly were a lot of them, Sir!" Humans were created to reflect the moral and personal nature of God.

Then God said, “Let us make mankind in our image, in our likeness." (Genesis 1:27

Sin has distorted us such that the likeness is damaged. However, God called a people to himself, the people of Israel, to live specifically according to his likeness. The only one Israelite who managed to do so was Jesus, who had the very character of God. Jesus represents people to God as well as the inverse, representing God to people. He died a sacrificial death on the cross to heal our distorted character - to save us from sin. By wholly relying on Jesus as our we become acceptable and begin being reformed in his likeness.

He made us accepted in the Beloved (Ephesians 1:6).
We are not unworthy of such love and grace but because Christ has removed the guilt of our sin by paying its penalty on the cross, we know that we are fully accepted by God.

In him we have redemption through his blood, the forgiveness of our trespasses, according to the riches of his grace, which he lavished upon us, in all wisdom and insight making known to us the mystery of his will, according to his purpose, which he set forth in Christ as a plan for the fullness of time, to unite all things in him, things in heaven and things on earth. In him we have obtained an inheritance, having been predestined according to the purpose of him who works all things according to the counsel of his will, so that we who were the first to hope in Christ might be to the praise of his glory. In him you also, when you heard the word of truth, the gospel of your salvation, and believed in him, were sealed with the promised Holy Spirit, who is the guarantee of our inheritance until we acquire possession of it, to the praise of his glory. (Ephesians 1:7-14). When a voice in your head barks, "You're a useless idiot!" remember that as you trust in Jesus Christ any mistakes you have made are forgiven and you are being reformed into the likeness of God.