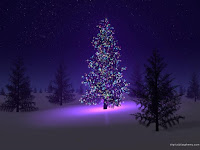 The origins of the Christmas tree are not known but legend has it that Martin Luther began the decorating of trees to celebrate Christmas. In the year 1500, one crisp Christmas Eve, Martin was walking through snow-covered woods and was struck by the beauty of a group of small evergreens. Their branches dusted with snow shimmered in the moonlight. When he returned home, he set up a little fir tree indoors so he could share the story with his children. He decorated it with candles, which he lighted to simulate the reflections of the star  that looked down over Bethlehem on the first Christmas Eve.

Charlotte left Mecklenburg-Strelitz in 1761, and came over to England to marry King George of England... She brought with her many of the customs that she had practiced as a child, including the setting up of a yew tree in the house at Christmas. But at the English Court the Queen transformed the essentially private Christmas tree ritual of her homeland into a more public celebration that could be enjoyed by her family, their friends and all the members of the Royal Household.   In time this would grow into the tradition of almost every English home having a Christmas tree as part of their celebrations.

It is a long time since 1761, and from 1500 - and even longer from that dark night brightened by a special star in which Jesus the king was born.
Yet, as we approach December 25 again, it gives us yet another opportunity to pause and look at the Christmas trees.  When you see a Christmas tree its sparkly lights and tinsel remember the reflections of the Bethlehem star and reflect on the miracle that occurred that night: God became a human as part of his aim to rescue us from sin and shame and death.  A surprising and evergreen story of God coming to save us.