The year of our Lord 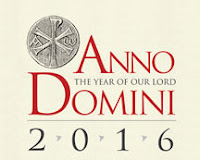 In proclaiming that Jesus is King, we are giving the heart of the gospel message. It's good news, because Jesus is in charge. And lots of facts flow from that. For example, it means that if you turn to him in repentance, and trust in his death on the cross, and his resurrection from the dead, then you are forgiven for your sins, and you are given new life. This flows  from the fact that Jesus is King right now.

As people come to faith in Jesus,  they reorder their lives around the truths learned from scripture and the promptings of the Holy Spirit. In being born again by the Spirit, they are given the ability to live a new life, because they have access to God's power such that they can live better lives. They can live lives that follow in God's ways..

You need to react to other people, and that makes coming to faith intrinsically political.  As more and more people turn to faith and apply their faith politically, a whole nation can be transformed.

The conclusion is inescapable pray, preach and witness to win people to faith in Jesus Christ as Lord.  Lead by example in applying your faith to all areas of life including who you vote for. In this way, by the grace of God you nation can live the abundant life Jesus promised.