November 05, 2016
Guy Fawkes converted to Catholicism in his early twenties, he went from England to fight in the Spanish war for the Catholics  against the Protestant Netherlands. There is a clear parallel with radicalised Muslims travelling from England to places like Iraq and Syria to fight.  Just as these young radicals do, Fawkes got a taste in Spain of killing for his cause. He then returned home and became involved with the gunpowder plot.  In a similar way we newly religious young people traveling from western countries abroad to train and fight and then returning home with the idea of killing for their religion.

“Guy Fawkes is a modern-day jihadist in that he was someone who tried to spread his ideology through terrorist force. He thought he had to promote the Catholic faith as being the dominant faith, and promote laws under that faith instead of the laws of the country" says Haras Fariq of the Quilliam Foundation. “Guy Fawkes had a political goal, which was to spread Catholicism. Likewise, Islamism is the goal of jihadists today – that is, a political ideology that aims to establish Islamist states and govern by their version of Sharia law"

To carry out their plan, the conspirators got hold of 36 barrels of gunpowder - and stored them in a cellar, just under the House of Lords.

In 1603, English Catholics who had been persecuted under the previous queen's rule had hoped that the new king, James I, would be more tolerant of their religion partly because his mother was Catholic. Unfortunately, James did not turn out to be more tolerant than Elizabeth and group of terrorists, under the leadership of Robert Catesby got together to organise an attack on the government.  They planned to blow up the Houses of Parliament. In doing so, they would kill the King, the Prince of Wales, and many members of Parliament.

Some of the plotters started having second thoughts and one sent a letter of warning. On October 26 1605, Lord Monteagle, received this anonymous letter warning him not to attend the opening of Parliament. The letter was passed to the King and the authorities searched the cellars of the Palace of Westminster. The gunpowder was discovered and the plot foiled. Guy Fawkeswas found in the early hours of November 5 1605. He was captured, questioned and eventually tortured to extract a confession. He and the whole group of terrorist were killed.

Following the failed plot, Parliament declared November 5th a national day of thanksgiving, and the first celebration of it took place in 1606. Effigies that are thrown on to the bonfires  these are called “Guys" in reference to Guy Fawkes. The celebration each year also features fireworks to represent the explosives that the plotters were foiled from using. This celebration came to be called bonfire night.

Across England we celebrate this day. I am writing this blog entry on November 5th and I can hear fireworks be let off from barges in the middle of the river Mersey to celebrate bonfire or fireworks night.  Earlier I saw an effigy of Guy Fawkes being carried down the road to his fate on a bonfire. 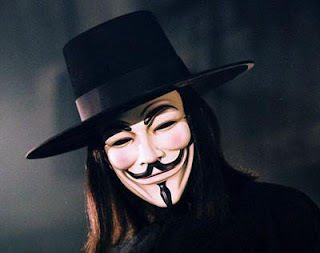 Bonfire night is a celebration of counter-terrorism and I think that is worth celebrating. Celebrating the work behind the scenes, often in dangerous circumstances, to foil terrorist attacks.  It is also a reminder to pressure our governments to be strong and put in place measures stop young men being radicalised as Guy Fawkes was and as young radical Islamists are today.  These radical Islamists do not represent the many many peaceful Muslims who contribute to English society and neither did Guy Fawkes represent the majority of Catholics in England in his today.  However the threat was real: if not countered effectively the gunpowder plot of 1605 could have re-written history.

The current trend of wearing a Guy Fawkes mask if you want to portray yourself as some champion of freedom is misguided. Guy Fawkes was a terrorist, part of a group of plotters who thankfully were unmasked in a successful counter-terrorist move.