Faith Turns The Impossible Into Reality 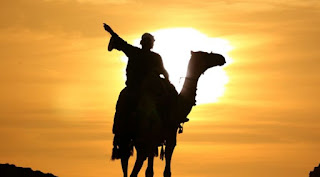 He took him outside and said, “Look up at the sky and count the stars—if indeed you can count them.” Then he said to him, “So shall your offspring be.” Genesis 15:5-6

Abram believed the Lord, and he credited it to him as righteousness.God told Abraham that his physical descendants would be as many as the stars in heaven. Now when this statement was made, Abraham and Sarah were already past the child bearing age.

Nevertheless, God said it would happen. Now what is Abraham to do? He believed God! He acted upon this information. And for us, believing in the Bible, means acting upon what God said to us.

Then what does God do in response to Abraham's acting upon His statement concerning a child for himself and Sarai? (Abraham's old age made no difference to God.) When he acted on His word, God did two things. First, He counted Abraham's action upon His promise to have children the same as righteousness. (The word righteousness means cleared of all guilt.) Whatever sin may have been in Abraham's life, this was his freedom from his past. His believing God was counted for the clearance of all the guilt for all his sins.

Of course the second thing God did was give Abraham and Sarah their own, natural child. His name was Isaac. And later, Isaac brought forth Jacob and Esau.  Since God did the above miracle for Abraham, He can do the same thing or greater for us. Nothing is too big for God to do in our behalf.
We Christians are grafted into the Abrahamic blessing promises right along with Abraham. If we believe God he will bless us and those we know.  How comforting to know that what God did for Abraham, he can and will do an equal thing for us Christians today to meet our needs also.