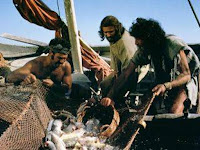 When he had finished speaking, he said to Simon, “Put out into deep water, and let down the nets for a catch.” – Luke 5:4

Below is a reimagined story of what Peter, a working fisherman was thinking at around the point when a carpenter from the north of the country was becoming known. This Carpenter had moved into a preaching and healing ministry and seemed to have a direct line to God.

Peter is tired from a long night of toiling. He’s spent the past twelve hours trying to fish. As he watches the sun rise, he thinks about the pile of bills on his kitchen table. His son needs new shoes. His wife needs to see the doctor.

There’s just not enough to go around.

He’s failed to provide for them. Again.

Then Jesus appears on the scene. Peter’s heard of the Carpenter from Nazareth, his miracles and his healing. The Carpenter tells him to let down the nets once more.

Simon answered, “Master, we’ve worked hard all night and haven’t caught anything. But because you say so, I will let down the nets.” (Luke 5:5)

The results made Simon’s eyes bug out. The nets filled to overflowing. He caught so many fish that he had to yell for others to come help him with the haul. He’s amazed and overwhelmed.

Are you standing where Peter was? Have you tried again and again to accomplish something in your own strength? Maybe you’ve been determined to repair the crack in your marriage or overcome an addiction. But no matter what you do, you just can’t seem to get it together.

In the face of hopelessness and despair, Jesus is whispering over you the same thing He said to Peter, “Try one more time.”

God, I feel so weary and overwhelmed. Give me the strength to let down my net once more. I trust You to provide for me and my household. In Jesus’ name, Amen.