Why the Taliban won so quickly. 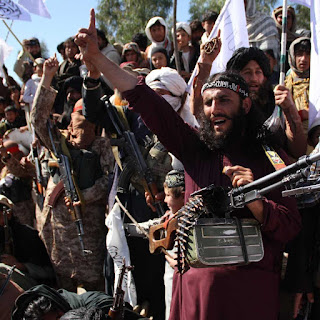 “Kabul could come under Taliban pressure as soon as September and, if current trends hold, the country could fall to the Taliban within a few months.”

Within days of that assessment  Kabul had fallen to the Taliban. Why was it that Kabul fell so soon: how could the Taliban take over so quickly? The short answer is that it seems that the Afghan government had concluded that fighting was pointless.

But the main and more fundamental reason for the speed of the victory is to do with  the fact that the Taliban, although hated and feared by large numbers of people in Afghanistan, are actually popular. This is because, I suggest, the vast majority  of the population of Afghanistan wants to be ruled with Islamic Sharia law.

For those people in Afghanistan who want to want to live a secular or Christian lifestyle, Afghanistan is not safe.  And many of them have already left to live in other countries. Those who are still there may find their freedoms curtailed since, according to Pew research, 99% of the population of Afghanistan want Islamic Sharia law to be enforced in their country.

This meant that, when the American troops were leaving, the Taliban rapidly took over the entire country, not because of military superiority Taliban but because there is not much  resistance within the country. This was exacerbated by the US administration under Joe Biden reneging on a deal negotiated with the Afghan government and the Taliban on the timing of withdrawal.  This  breaking of the agreement made the American backed Afghanistan government seem illegitimate in the eyes of many there, it seem. And this in turn gave good material for a Taliban recruitment drive.

In the face of this popular revolt, the Afghan leaders left. Now the people they once led are under the control of that tiny minority of extremists who fought the Soviet Union for nine years. This group, now called the Taliban, then fought the United States of America for two decades and won.  They didn’t win in the sense  that they defeated the two most powerful nations in history on the battlefield. They won by wearing down the will of the countries they fought against. They won by being patient and relentless. And they won this time because the majority of Muslims in the country prefer  Sharia Law to an American backed government.

I based these remarks on the insights from people more knowledgeable about Islam, especially see this video.

4 Levels of Spiritual Warfare Against Demons

September 12, 2018
There are 4 basic levels which a Christian may have to face. Having the specific knowledge on what each one of these levels are all about can really help with planning and carrying out the appropriate battle strategy in which to defeat them should demons ever move in for an attack on either you or any of your close loved ones.  Every time that Jesus told his apostles to go out and walk with his anointing to save the lost and heal the sick - He always had the command in there to also cast out demonic spirit where and when needed. So if Jesus was constantly casting out demons, always telling the apostles to cast out demons - then it should only be logical that the church should continue to cast out demons. It has been estimated by many Bible scholars that approximately 25% of the miracles Jesus had performed were him casting demons out of people. Satan and his demons are not confined to the Bottomless Pit at this time. This event will not happen until Jesus returns back t
Read more

November 25, 2011
I was on the cusp of buying a birthing pool.   They are inflatable and relatively cheap.  Unfortunately, they are intended for women of about 5'9" height.  I, however, required the birthing pool for a man.  The man in question was over 6' tall.  He was, of course, not going to give birth but, rather, he had been born again.  The pool was required for baptism.  So instead of the birthing pool I bought a paddling pool.  The pool was 12' in diameter but only 30" high.  I set it up in the garden and filled it with water.  On my getting into the pool to try it out the week before the baptism, there was a veritable tidal wave engulfing a large section of my lawn.  No good then.  Instead I borrowed a custom made baptistry from a nearby church.  The baptism went swimmingly. A couple of days before the baptism, which took place in our regular Sunday morning service, there was a pool tournament in our church.  The guy who was about to be baptised in the baptismal pool
Read more

Anxiety in a time of pandemic

October 14, 2020
Anxiety is increased by government Covid-19 propaganda In these times of a pandemic and lockdowns it is easy to be anxious. What are the reasons behind this? How should Christians respond? How is this anxiety exacerbated by the UK Government messaging and the Coronavirus pandemic.  Isolation is not natural for human beings - we are not designed for it. In times of crisis, such as we are experiencing with Covid-19, our instinct is to group together. Yet here we are, millions of us, isolating ourselves even from close family members to prevent the spread of the disease, while at the same time being bombarded with horrifying headlines. So it’s no surprise that many people are feeling anxious and fearful.
Read more